The Directors of International Academy HAGIA

She is a philosopher and researcher on culture and society, focused on matriarchal studies. She was born in Thuringia (Germany) in 1941 and is mother of three children, two daughters and one son.

In 1973 she took her Ph.D. in philosophy and theory of science at the University of Munich and taught philosophy for ten years there (from 1973-1983).

Since 1976 she has been doing pioneering work in Women’s Studies in West Germany. She has published various books on matriarchal society and culture, and has become the founding mother of Modern Matriarchal Studies. She works as independent scholar.

In 1986 she founded the “HAGIA. International Academy for Matriarchal Studies  and Matriarchal Spirituality” in Germany, and since the beginnings she has been its director. 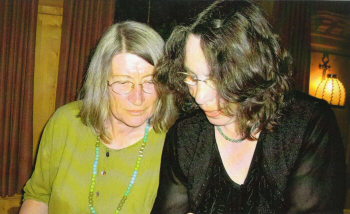 She is one of the women across the globe who have been nominated by the worldwide initiative „1000 Women for the NobelPeacePrize 2005“.

She was born in 1948 in Switzerland and is medical doctor. She also trained at the Centre for

Shamanistic Wisdom and Knowledge “Quetzalcoatl” in Ronco, Tessin (Switzerland), and is trained in physiotherapy and phytotherapy. Since 2005, she works as doctor and healer in her own practice in Germany.

Since 1997, she collaborated at the International Academy HAGIA and, since 2007, is co-director. She is guiding the Matriarchal Mystery Festivals and the Spiritual Healing Circles.

She does research on Matriarchal Medicine and presented it at the two World Congresses on Matriarchal Studies in Luxembourg (2003) and San Marcos, Texas (2005).