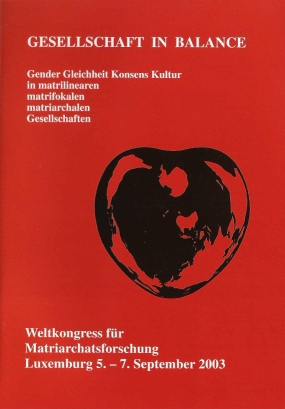 In 2003, the First World Congress on Matriarchal Studies, “SOCIETIES IN BALANCE,” took place in Luxembourg. Chiefly sponsored by that country’s Minister of Family and Women’s Affairs, Marie-Josée Jacobs, it was organized and guided by Heide Goettner-Abendroth, founding director of International Academy HAGIA in Germany. It was a ground-breaking event that brought together for the first time international scholars who had previously been working on this issue in relative isolation from each other. A milestone with great historical implications for Matriarchal Studies in general, it grew out of Academy HAGIA’s international contacts and enabled a wide-ranging, alternative scientific network to come into its own.

The congress papers of the first congress have been published in German in: