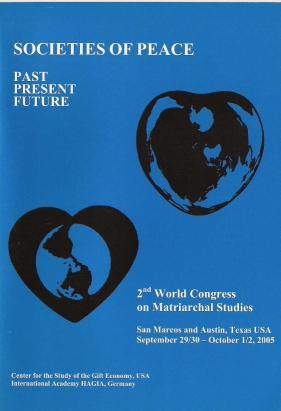 In 2004, Genevieve Vaughan invited Heide Goettner-Abendroth to bring this new field of Modern Matriarchal Studies to the United States. (Genevieve Vaughan who participated in the first World Congress, is the founding director of the Center for the Study of the Gift Economy in Austin, Texas.) After a year of friendly collaboration between Heide in Germany and Genevieve in the USA, the Second World Congress on Matriarchal Studies, “SOCIETIES OF PEACE,” was held in 2005 at the University of San Marcos, Texas.

It went even beyond what had been achieved by the first congress. It included indigenous researchers, mostly women and some men, from several of the world’s still existing matriarchal societies. They came from North, Central and South America; from North, West and South Africa;  from Asia, including China, Sumatra and India. This made the Second World Congress an unparalleled precedent with respect to the meeting of indigenous matriarchal speakers from all over the world. They spoke not only about the matriarchal patterns their societies have preserved, but also about the social and political problems that colonization and missionization have caused to their communities. In this way, they corrected distorted perspectives often held by non-indigenous peoples, and taught the audience about the non-violent social order of their communities.

The congress papers of both congresses have been published in English in:

Societies of Peace. Matriarchies Past, Present and Future